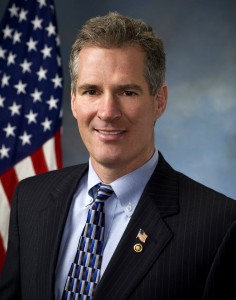 – Former Massachusetts Sen. Scott Brown was surprised by a change of venue when he arrived in St. Louis for an event with the St. Louis University chapter of the College Republicans.

“I get there yesterday and said, ‘we all set?’,” Brown said in an interview. “They said the administration wouldn’t let you on campus, we couldn’t get a room.”

The event, which student organizers at the private, Catholic university had hoped to hold on campus, was moved to a restaurant several blocks away, instead. Todd Foley, assistant director of the Student Involvement Center, told the organizers last week they would not be able to host Brown on campus for fear that it may be in violation of tax laws governing the private university.

“[T]he University has determined that Scott Brown is considered a candidate for public office and therefore falls under the provisions of the Tax Code from the IRS regarding educational institutions hosting candidates for public office. His appearance here would be a violation of our Tax Exempt status as a 501(c)3,” Foley wrote in an email obtained by PoliticMo.

He continued, “Since Scott Brown has made comments about possibly running for office in NH and that others have made similar comments about him running, then the IRS would consider him as a candidate — thus it being in conflict with our tax exempt status.”

Foley was not responsive to a request for comment on Wednesday. SLU has hosted political candidates in the past, including a campaign rally for former Republican vice presidential nominee Sarah Palin after a debate in 2008.

Brown has not declared a candidacy for any office. He did establish a political action committee in New Hampshire called the People’s Seat PAC Inc., where some believe he might be considering challenging Democratic U.S. Sen. Jeanne Shaheen.

Brown, in an interview, said he set up the committee to fulfill his promise to support Republican candidates and that people are reading way too much into the formation of a PAC.

“By law, if you want to give one dollar to a political candidate in New Hampshire, you have to file a political action committee,” he said. “I said when I lost that I was going to go around the country speaking to as many groups as I could to try to unite our party.”

As far as his political future, Brown was noncommittal.

“My plans are to continue doing what I’m doing and fulfilling my goal of helping good people who deserve my support in raising money,” he said. “I’m tired of the extremes on both sides.”

Brown was in Missouri on a three-city tour hosted by the Missouri College Republicans. On Wednesday, Brown spoke at the University of Missouri-Columbia, and was set to speak at Missouri State University in Springfield on Thursday.

← McCaskill “embarrassed and angry” about troubled Obamacare rollout
Ron Richard: Revised gun bill will be first up when Senate returns →