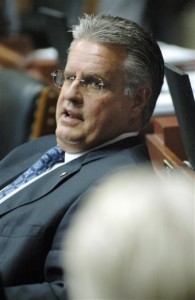 – What will be the first bill on deck when lawmakers return to Jefferson City in January? A bill that would aim to weaken federal gun rules, Senate Majority Floor Leader Ron Richard said on Thursday.

Richard, a Joplin-area Republican who joined Senate President Pro Tem Tom Dempsey in blocking an override attempt of Democratic Gov. Jay Nixon’s veto of legislation that would have made it a crime for federal authorities to enforce some federal gun laws, published a draft bill with the same intent, but with hopes of addressing some of the constitutional qualms raised by Nixon and others.

“That’ll be the first bill that gets out of the Senate, debated, and passed,” Richard said in an interview.

Richard said he worked with groups like the Missouri Sheriffs Association (who opposed provisions in the bill that would have effected law enforcement relationships with federal partners) and the Missouri Press Association (which opposed a provision barring the publication of names of gun owners) in drafting a proposal that addressed many of the issues raised in Nixon’s veto message.

“We worked with the Sheriff Association and the police chiefs,” Richard said. “The intent (of House Bill 436) is still there, we just clarified the language.”

The new language, published on his official website, also aims to (1) lower the minimum age to obtain a conceal carry permit from 21 to 19, (2) waive the fee to obtain a conceal carry endorsement for disabled veterans, (3) make it illegal for undocumented immigrants to be in possession of a firearm, and (4) allow some school teachers or administrators to carry a concealed firearm. The proposal does not include the section which would have made it a Class A misdemeanor for federal government officials to enforce federal gun laws deemed objectionable by the state.

Richard said Rep. Doug Funderburk, R-St. Charles, who sponsored House Bill 436, was supportive of his bill, and that its Senate handler, Sen. Brian Nieves, R-Washington, was also reviewing the bill.

Sean Soendker Nicholson, executive director of Progress Missouri, an organization which actively opposed House Bill 436 earlier this year, said Richard and others should focus more on violence prevention and less on other gun issues.