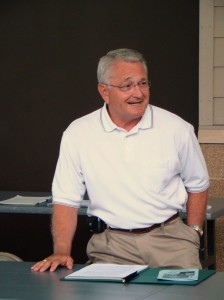 – State Rep. Mike Thomson, R-Maryville, says the media is blowing up the story of an alleged sexual assault case involving his predecessor’s grandson out of proportion.

The case, reported over the weekend in a 4,000 word expose by the Kansas City Star following a seven month investigation, centers around the alleged sexual assault of Daisy Coleman, an underage girl, by then-17 year old Matthew Barnett, grandson of former State Rep. Rex Barnett, R-Maryville.

The case was closed and the charges were dropped by Nodaway County Prosecutor Bob Rice, who said there was not enough evidence to bring criminal charges against the suspects.

Thomson, in an interview with Missouri Digital News on Tuesday, said he wants the story to “die,” not spread as it has in the national media, despite widespread calls online for further investigation.

“I have read some of the articles that are out there, and they say, ‘How do you sleep?’ You know, I sleep fine and I don’t even lock my doors, because I live in a small community where I trust my neighbors and they’re good people,” he said. “I don’t know the facts of this case, if things should have gone differently, I don’t know. But to be depicted the way we’re being depicted across the nation right now is a shame.”

Still, it is unlikely to go away anytime soon. Next week, supporters of Coleman – with the help of the cyber-activist and hacking group Anonymous – have planned a rally in Maryville where they plan to call on Rice to reopen the case.

Attorney General Chris Koster’s office said Tuesday they have no authority to review or overrule a prosecutor’s decisions, essentially putting the ball of any further action back in Rice’s court.

← Debt limit breach could affect Missouri finances, officials say
A year out, Schweich has 25 to 1 cash advantage over Swearingen →