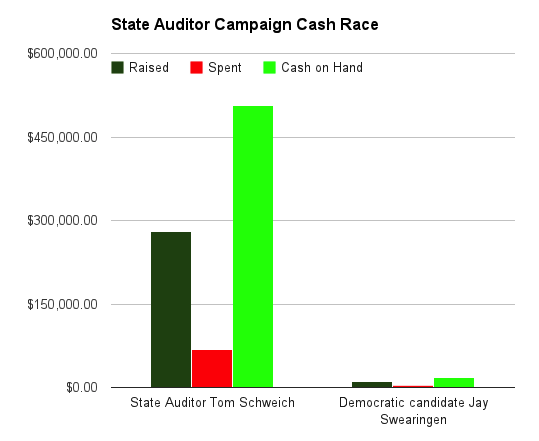 – Almost a year out from the November 2014 election, Republican State Auditor Tom Schweich reported more than $500,000 on hand at the end of this year’s third quarter.

Schweich, who is seeking reelection for the first time next November against Democratic State Rep. Jay Swearingen, raised more than $280,000 between July 1 and September 30, according to a report filed last week with the Missouri Ethics Commission.

“It is truly satisfying to know that so many approve of the job I have been doing,” Schweich said in a statement. “I know that being state auditor is a great honor and a tremendous responsibility, and I look forward to continuing to defend taxpayers and expose government waste.”

Swearingen, meanwhile, reported just over $18,000 on hand, raising nearly $10,000 over the past three months. Swearingen announced his candidacy in mid-September, just a couple of weeks ahead of the September 30 fundraising deadline.