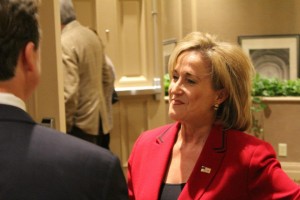 State Rep. Bill Otto, a St. Louis Democrat, on Tuesday made official what had been rumored for weeks: He will challenge Republican U.S. Rep. Ann Wagner for reelection next year.

In a web video, Otto – a former air traffic controller at Lambert Airport and City Councilman in Bridgeton – announced his candidacy:

“The men and women of this district deserve better representation… When I was 15 years old, my mother died and I was placed in a boys home. On my 17th birthday, I was put out on the streets — no family and no place to go. I was homeless at 17. It was a tough start. But, with the encouragement and support of some amazing teachers and mentors, I attended college and later joined the Navy…

“As a legislator, I’l fight every day for the issues that matter to the hard working men and women I represent: Defending workers’ rights, making sure our veterans have the respective benefits they deserve, and protecting the American dream for our families when others have dropped the ball. Congress has turned into a group of elitists that have turned their back on the reality in which we live here in our neighborhoods every day.”

Wagner, rising in the ranks among Republicans in Washington, was elected to congress in 2012 and easily won re-election in 2014.