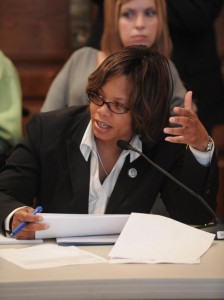 JEFFERSON CITY, Mo. – A Missouri Senate committee on Tuesday voted down legislation that would bar public employees from probing into a job applicant’s criminal record before offering them a conditional offer of employment.

Sponsored by Sen. Jamilah Nasheed, D-St. Louis, her “ban the box” bill – even paired back to only public employees – did not receive the requisite number of members of the Senate Small Business, Insurance and Industry Committee.

The measure – which has already been enacted in St. Louis, Columbia, and Kansas City – is targeted at helping those with criminal histories, like felons, get past the stigma in the initial stage of the hiring process. Nasheed’s bill would still allow employers to take one’s criminal history into account after they have been given an initial offer.

Sen. Doug Libla, R-Poplar Bluff, said he opposes enacting the “ban the box” policy statewide, but is not opposed to cities enacting the policies on their own.

“I’m a guy of second chances. We’ve given folks second and third chances,” he said. But at the state level, he said, “Making another protected class of workers isn’t the way to do it.”

Nasheed, speaking later in the day on Tuesday, said her efforts were not over. She said she thinks Gov. Jay Nixon, a Democrat, could enact the policy for public employees by executive order – as have nearly a dozen governors in other states.