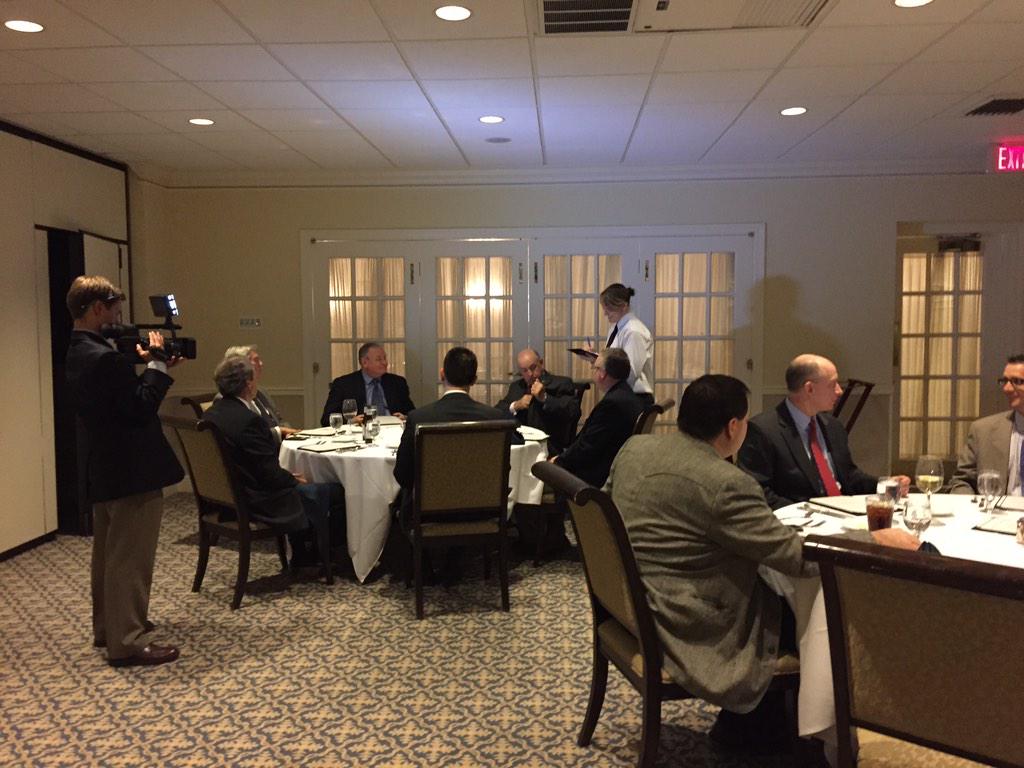 The meeting was one of two scheduled there this week, only a few miles away from the Capital. At these hearings, meals were to be paid for by representatives of industries the lawmakers were tasked with regulating.

On Tuesday night, the meeting was hosted by state’s telecommunications industry, and the costs of meal – at an official legislative hearing – were covered by the Missouri Telecommunications Industry Association.

Rep. Bart Korman, a Republican who chairs the committee, said the location was chosen by the association. When asked why a lobbying group was deciding the location of a committee hearing and not the elected lawmakers or the committee’s chairman, Korman said, “well, they did on this occasion.”

Korman said the location of a committee was not as important to him as the content of the discussion (this time, a brief overview of the telecommunications regulatory environment and recent policy changes).

“It doesn’t matter where it’s at. As long as I have a place to sit down and don’t have to stand the whole night, I’ll be fine,” he said.

Korman was joined by three other members of his committee on Tuesday, including Reps. Ron Hicks, Jared Taylor, and Warren Love – the only lawmaker to enter the room with a glass of red wine.

Five lobbyists, including ones for AT&T, CenturyLink, and the industry’s association were present for the meal. Tuesday night’s tab was picked up by the association.

“Those are the guys you’re regulating,” Korman was asked by a reporter.

“There’s no impropriety here with you guys taking dinner from these folks trying to get policy through your committee,” he was asked.

“I don’t know,” he responded. “We set policy based on the testimony in committee hearings, so this one is just an informational meeting.”

The meeting of the Telecommunications Committee took place a day before the House Utilities Committee was scheduled to have a similar meeting, theirs paid for by the Missouri Energy Development Committee — an association funded by the state’s largest power providers.

House Speaker John Diehl, R-St. Louis, had pledged to do away with the off-site committees when he took over leadership of the House. Speaking with reporters on Monday, Diehl defended the committee chairman but suggested he might soon move to end the practice.

“We got rid of the issue development committees and have had talks with our chairman. Last year, there were people who had out of city committee dinners up in Columbia. That’s been cut back,” Diehl said outside his office. “This is something that’s been normal practice and a discussion we’re going to have in our caucus.”

Across the building in the Missouri Senate, Senate President Tom Dempsey said the offsite committee meetings were banned by practice, but not by Senate rules.

“We don’t have any of those in the Senate,” he said.