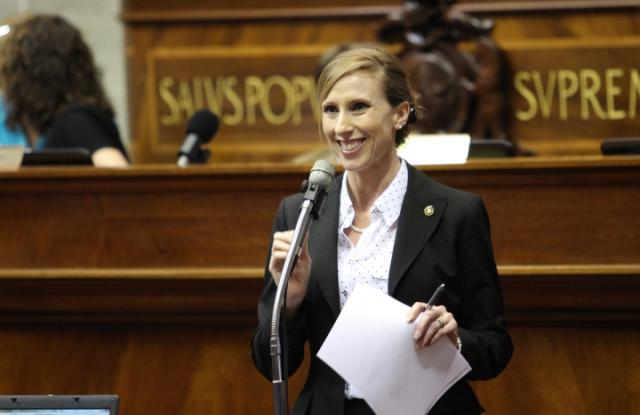 (Photo via Show Me Progress)

— Missouri State Rep. Holly Rehder, R-Scott City, told constituents that “perception is everything” in public relations — whether it be Adolph Hitler in Nazi Germany or Gov. Jay Nixon in Missouri.

In her weekly Capitol Report, Rehder wrote: “My degree is in Public Relations and one point that was hammered home throughout my study is that ‘Perception Is Everything’. This tidbit has been proven for years, if you will remember propaganda served as an important tool to win over the majority of the German public during Adolf Hitler’s rule,” she said. “I say this to remind you that you simply cannot take one side’s viewpoint and proclaim it as the gospel.”

Rehder used that idea to criticize Nixon’s public relations campaign against House Bill 253, the controversial income tax proposal he vetoed earlier this year. Nixon has campaigned throughout the summer claiming that if the bill is passed, the state could be on the hook for $800 million to $1.2 billion in retroactive refund payments because of “sloppy drafting.”

Rehder, citing the various things that would have to happen for that to go through (including passage of the federal Marketplace Fairness Act), said the governor’s office understands “how propaganda and fear moves our public.”

“We need to stop the scare tactics with education and government services,” she said. “Our focus should be on growing Missouri.”

Rehder, of course, added that she would vote in favor of overriding Nixon’s veto if it comes up for a vote next Wednesday.

← Less than a week from veto session, Rowden among Republicans undecided on tax cut vote
12 bills that could come up in House during veto session →