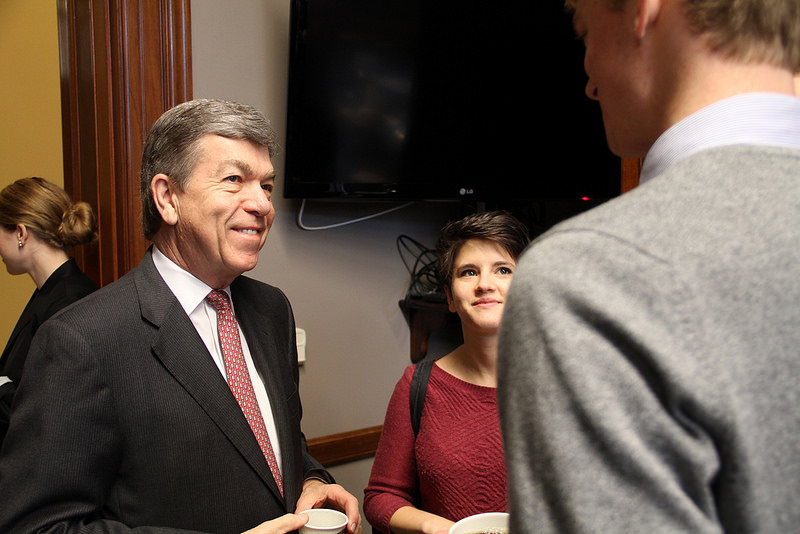 CAMDENTON, Mo. – U.S. Sen. Roy Blunt said Saturday he felt sympathy for Indiana Gov. Mike Pence in his recent fight over legislation supporters said would protect religious liberties, but opponents believe would give businesses there the right to discriminate against gay people.

Blunt, a Republican seeing reelection next year, compared Pence’s battle this year with his own in 2012 over a measure, known as the “Blunt Amendment,” which would have exempted employers from an Obama administration regulation that would have required them to provide contraception coverage to employees if their opposition was rooted in their own religious convictions.

“One of regulations clearly was designed not to respect the rights of people of faith,” Blunt said. “I immediately filed a bill called the ‘Rights of Conscious Act’ which immediately became, if you were on the other side, one of the worst things you could do to try to protect people of faith. I’ll tell you, in a two week debate on the Senate floor on that bill, only 10 people joined me on the floor to defend religious liberty.

“When Mike Pence was bravely standing up for the right of people to believe what they believe, I had a lot of sympathy watching them do that,” Blunt added.

Pence joined Blunt and nearly 500 Republicans here at the Lodge of the Four Seasons for the annual Camden County Lincoln Day Dinner on Saturday. Blunt shrouded Pence in praise, telling Republicans here that Pence is the kind of politician “who could hold any office he wants.”

In his own remarks, Pence rolled off the pieces of his own conservative agenda that he has enacted since being elected governor in 2013, including a voucher program for schools, tax cuts, opposition to the Common Core consortium established by a number of states and his controversial efforts on “religious freedom.”

“We’ve come to another time of choosing for America,” he said. “You’re either for protecting the rights of the unborn and every American with religious liberties or you’re not.”

To Missouri Republicans, Pence pled, “Will you please elect a Republican governor in 2016.” John Brunner, a St. Louis businessman who is considering a run for governor in 2016, was the only potential governor candidate in the room as the party seeks a candidate to challenge Democrat Chris Koster. To Pence’s remark, the ex-Marine offered a mild salute toward the stage.

In this state where Republicans have refused calls to expand Medicaid rolls citing budgetary concerns, Pence — whose own state has expanded Medicaid using the federal money — touted his own successful effort to receive funding for the health care program for the poor in a block grant. Pence said “market-based reforms that “bring more programs back to the state level” is the right approach.