FORT LEONARD WOOD, Mo. – Hundreds of soldiers and citizens, alike, packed the Nutter Field House here on Monday night as Army leaders sought input from the public and the state’s elected officials about its plan to reduce its domestic presence nationwide.

The numbers at Fort Leonard Wood are dire. As United States Army leaders canvas the nation looking to reduce its workforce by 14 percent from its wartime high of 570,000, this community could lose as many as 5,400 civilian and military jobs directly employed by the military by the end of the decade, said Joseph L. Driskill, executive director of the Leonard Wood Institute.

“The state of Missouri has been and must remain a critical asset to maintaining a strong defense for America,” Gov. Jay Nixon told about 2,000 people gathered here. “Our advantages stand out to make this region and Missouri ideal partners.”

After they finished a brief session in Jefferson City on Monday afternoon, 24 members of the 34 member Missouri Senate and more than 50 members of the state House of Representatives loaded up buses to show their support, too. Earlier in the day, the Senate gave unanimous support to a resolution that would urge the Department of Defense and the state’s congressional delegation to support the state’s military bases. 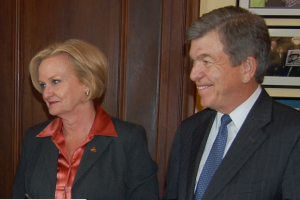 U.S. Sen. Claire McCaskill, the second-most senior Democrat on the Senate Armed Services Committee, said the showing of state leaders was strong, but did not amount to the community support for the military installation shown on Monday night.

McCaskill said the automatic budget cuts approved by Congress in 2011 – which both she and Blunt supported – have the ability to “trim our military to dangerous and unacceptable level.” The military needs about $70 billion a year for the next decade to maintain its force, she said.

“We can find some cuts in the $1 trillion discretionary budget and find some revenue to make our tax code more fair,” she said. “That could do it if we could compromise.”

McCaskill – speaking on the eve of the funeral for Missouri State Auditor Tom Schweich – said Monday night was a good time to look at whether to cut the force here “with an auditor’s eye.”

“Fort Leonard Wood has the lowest direct cost of training of all the Army’s training installations,” she said, noting that the cost of maintaining the installation should come second only to strategic location.

Blunt, in his own remarks, said Fort Leonard Wood offered unique assets not found elsewhere and is not challenged by issues like energy, environment, space or encroachment.

“My goal is to find things that are happening at other places that would better happen at Fort Leonard Wood and bring them here,” he said.

The base is already set to lose 1,200 jobs as the Army continues to deal with the 2011 sequester.