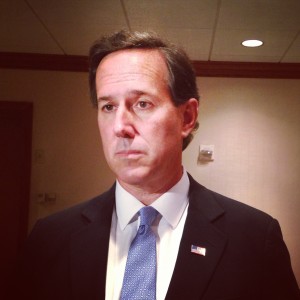 KANSAS CITY, Mo. – Rick Santorum, mulling a second run for the Republican presidential nomination, said Saturday that Republicans need to present themselves as more “caring,” and to prove it, they should support an effort to raise the minimum wage.

Speaking to party faithful here at the Missouri Republican Party’s annual Lincoln Days gathering, Santorum said the party should move beyond the “tired message” of touting efforts to “cut taxes for the rich to create growth,” and highlight specific proposals that would help the American middle class facing stagnant wages.

Santorum said he supports an effort that would gradually raise the nation’s minimum wage from $7.25 to $8.75 gradually over three years.

“I”m not for what Barack Obama wants too do,” he said, referring to Democrat-led efforts to raise the minimum wage to $10.10 an hour. “But, the idea that the Republican Party, at a time when median wages are stagnant, is opposing the minimum wage is stupid politics.”

Santorum said Republicans have a problem with people “not thinking we care.”

“Sometimes when someone is hurting, they want to know that one thing more than anything else,” he said. “People don’t think we care.”