JEFFERSON CITY, Mo. – The ink was hardly dry on the document certifying his primary election victory when Bob Onder, a St. Charles Republican, received quite a call: A group of lobbyists and more senior lawmakers were heading to Las Vegas, and they wanted him — a man who had just won a state Senate seat — to join them.

Onder soon met up with a team of lobbyists from Noranda Aluminum, including former House Speaker Steven Tilley, John Bardgett and Charles Skoda, a senior vice president at the company, along with half a dozen state lawmakers – including state Sen. Doug Libla, a southeast Missouri Republican with close ties to the company.

In Jefferson City — where the statehouse is governed by no limits on personal gifts and campaign contributions to lawmakers from lobbyists who are paid to sway their votes — it is common practice for legislators to get their meals, lodging and drinks paid for by lobbyists, according to multiple records maintained by the Missouri Ethics Commission.

But on this Vegas trip in mid-September, with three lobbyists and eight lawmakers, the only thing that was reported to the commission was an $8.50 expense from Skoda to Rep. Don Gosen, R-Ballwin.

“Given that many legislators can’t walk half a block in Jefferson City without taking a gift, it would be peculiar if the gravy train somehow stopped while they were partying in Vegas with three lobbyists,” said Cameron Sullivan, research director for the liberal group Progress Missouri.

Onder, who will be sworn in to office next month, said this time, that was exactly the case – no gifts. How did this trip come to be?

Onder said he received a call from Libla following his election inviting him to join him at his Las Vegas home for his annual golf getaway. When he arrived, he joined up with the group of lawmakers there. The list included Gosen and Libla, Sen. Mike Parson, and Reps. T. J. Berry, Steve Cookson, Robert Cornejo and Dave Schatz, said Onder and another participant.

Onder said he did not know until he arrived that the lobbyists would be present.

“The first day we got to the golf course, we sat and had some appetizers and some drinks, and Libla said, ‘Look, these lobbyists were coming, I’m sure they’d be happy to pay for everything.’ The guys at the table and decided we would all pay our own way,” Onder said, describing the trip as mostly a “social outing.”

About half of the men on the trip stayed at Libla’s home, while the other half stayed at another condominium nearby.

Though no exchange of gifts was reported, the episode reveals the close ties lobbyists form with state lawmakers and the extent to which they can legally go to push their agenda.

Missouri Secretary of State Jason Kander has dubbed Missouri’s ethics laws the “Wild West of politics.” Missouri lawmakers accept nearly $1 million in free food, booze and tickets from those attempting to sway their votes each year. That’s $1.8 million over the past 24 months from 18,800 gifts — or about $100 a pop.

Despite the reporting requirements in law, detailed information is not easily accessible. The specific data is not publicly available for two months. It is buried deep on the website of the Missouri Ethics Commission, and the details on each individual lawmaker is buried deep behind multiple clicks. And even if a person gets that far, all the information they are seeking might not be there.

Under the current law, lobbyists can report meal expenditures to a particular committee or the entire General Assembly, a loophole that has allowed reporting requirements to be skirted. The only catch is that all of the members of the committee or the entire General Assembly actually has to be invited. Many times, this practice has been used when a lobbyist wants to purchase meals to be served during lunchtime committee hearings or in a private room in back of the House of Representatives chamber when lawmakers are in session late in the evening.

Other times, it is when they are on junkets far from Jefferson City.

This summer, a handful of lawmakers went to New Orleans for a meeting of the American Legislative Exchange Council. The group, financed by some of the nation’s largest companies, writes model legislation for conservative lawmakers. One night on the trip, five lawmakers — House Speaker Tim Jones, Majority Leader John Diehl, Rep. Sue Allen, Sen. Ed Emery and Sen. Wayne Wallingford — went to dinner at a steakhouse described as the “Best French Quarter Restaurant.” Seven lobbyists joined them.

Unlike the Las Vegas trip, this time lobbyists reported paying for the meal. When it was all over, the five lawmakers had racked up a $3,000 tab. The bill was split seven ways, paid in part by each lobbyist present. It was clear that only five lawmakers were there, but the tab was attributed them and 192 other lawmakers, hidden under the veil of the “Entire General Assembly.”

The practice is on the rise. According to data made available by LobbyingMissouri.org, nearly 80 percent of all lobbyist gifts reported in 2014 were directed to groups, not individual lawmakers. 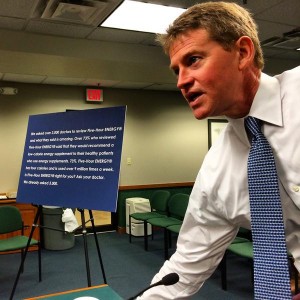 Highly funded influence peddling is not limited to 201 West Capitol Ave. Across the street on the first floor of the Missouri Supreme Court, the office of the attorney general has come under the microscope for its own dealings with the representatives of companies trying to limit litigation against themselves.

In October, the New York Times released a stinging report on Attorney General Chris Koster, a Democrat who has made clear his plans to seek the party’s nomination for governor in 2016. The story detailed how Koster’s office managed negotiations with companies like Pfizer and 5-Hour Energy, both of which share a law firm that has sent large checks to Koster’s campaign.

Koster has denied the allegations that he given favors to the companies, but he has, nonetheless, said his campaign will change its practices. At a House investigative committee hearing earlier this month, Koster said his campaign would no longer accept contributions from companies with litigation pending against his office, contributions from lobbyists or law firms involved with the cases, and nor would he accept any more gifts “of any value” from registered lobbyists.

Since the story in the Times, Koster has self-regulated. Whether lawmakers will do the same is not yet clear. Six bills relating to lobbyists have been filed by lawmakers preparing to return to the Capitol for the 97th General Assembly in January.