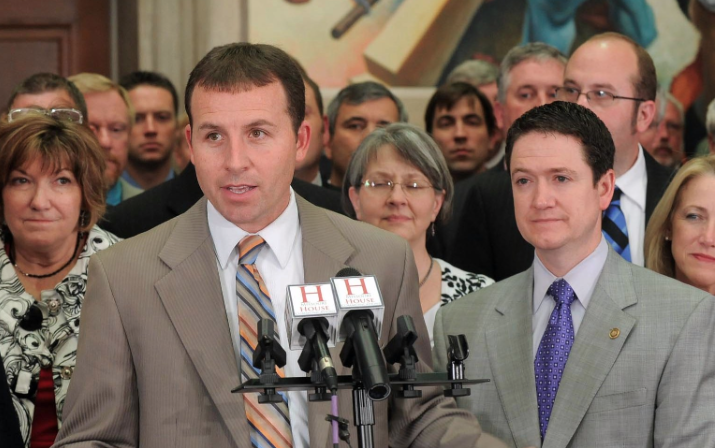 JEFFERSON CITY, Mo. – After opposing efforts to move a ‘right-to-work’ bill in the legislature while serving as Speaker of the House, Steven Tilley is back at it again – this time, joining the AFL-CIO as a lobbyist as it revs up for a potentially big fight over the issue.

Tilley, who started his lobbying firm soon after leaving the House in 2012, was retained by the labor organization along with powerful Jefferson City lobbyist John Bardgett and Danny Pfeifer’s Catalyst.

“The Missouri AFL-CIO has always enjoyed a good working relationship with Steve Tilley, from his time on the House floor to his service as Speaker of the House,” said Mike Louis, Missouri AFL-CIO Secretary Treasurer. “His willingness to support Missouri’s working families and look for bipartisan solutions to create jobs in our state has earned our respect. Now we look forward to looking forward with Steve and his team. It is time for our this legislature to start focusing their attention on real priorities like job creation instead of unnecessary and unfair ‘right to work’ bills.”

Even as a Republican Speaker of the House, Tilley was hesitant to touch the controversial policy. In an interview at the time, he called it “divisive,” and said he would have rather focused his efforts on economic development legislation that drew consensus from both the labor and business community.

In a brief statement on Wednesday, Tilley echoed that sentiment when asked what his case will be to undecided Republican lawmakers.

“There are so many things we can do for this state to make it a better place to work and live, that both labor and business can agree on,” he said. “There is no reason to start that discussion with the most divisive issue possible.”

Tilley and Bardgett are part of a nine member lobbying team employed by the Missouri AFL-CIO as the fight begins to ramp up. Adoption of a ‘right-to-work’ law – which would ban payment of union dues or similar fees as a condition of employment – has become the chief priority of Tilley’s successor, House Speaker Tim Jones. Bills are making their way through committee and Jones expects to get it to the floor early in session.

It’s unclear how far the policy will move this year. It could very well make it out of the House, but it’s chances in the Senate – where Democrats can block bills with a filibuster – are less certain. Democratic Gov. Jay Nixon will surely veto the bill, so it’s only real chance of becoming law is if it is placed before the voters, which Jones has indicated to be his preference.

Eric Burlison’s HB 1099 will likely be the legislative vehicle to move the policy. It was heard in early January and will likely move out of committee in the coming weeks. If it makes its way out of the legislature, it would place the issue before voters on the August primary ballot.