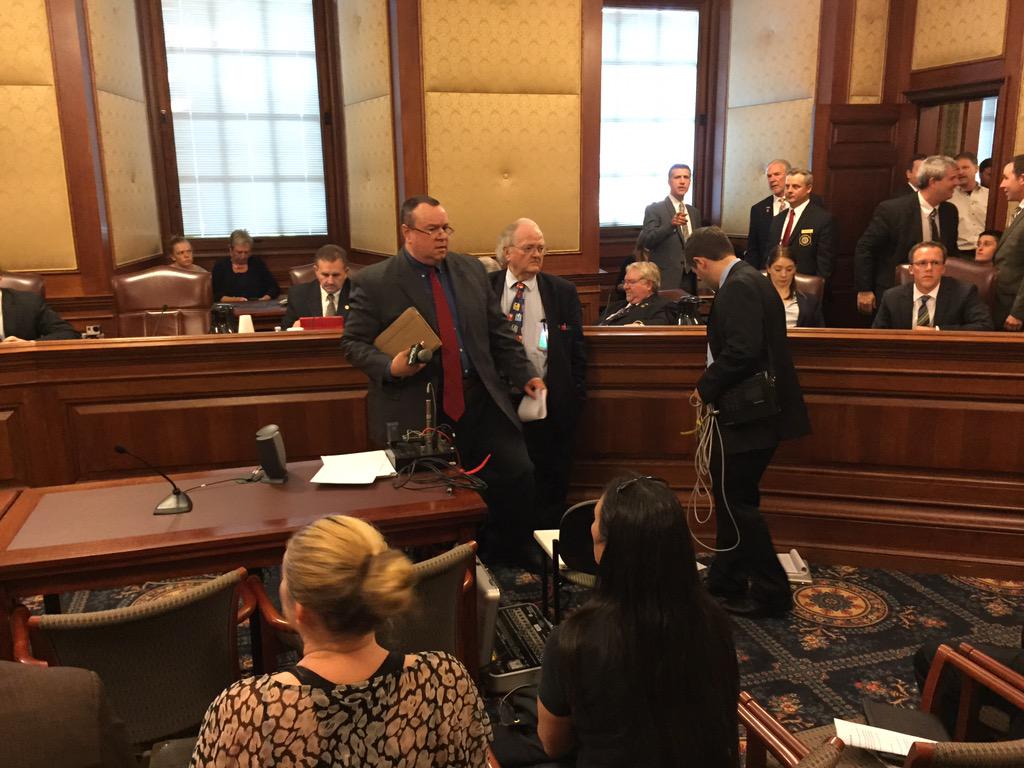 JEFFERSON CITY, Mo. – As the Missouri Senate prepared for a showdown on “right-to-work,” people attending a hearing on the bill Monday engaged in a showdown over another “right”: the right to film.

The option to obtain the video later was not enough for a number of radio journalists who hoped to record audio from the meeting in time to use it in their broadcast reports. “It’s like standoff at the OK Corral here right now, press aren’t backing down from access to audio recording,” said Alexandra Townsend, an organized labor activist who works for AFSCME.

KMOX, @NewsTribune & @MarshallGReport not backing away from the audio box. #MOLeg pic.twitter.com/Nbe1tG1xdC

When state Sen. Mike Parson, the committee chairman who has said he is also seeking the Republican nomination for governor, arrived, he reneged on the ban on audio recording, but kept in place a policy banning anyone from filming the hearing or taking a photo.

The Missouri Sunshine Law states that, “a public body shall allow for the recording by audiotape, videotape, or other electronic means of any open meeting.” But, Senate rules require anyone wanting to film to receive permission first, citing a provision in the Sunshine Law that allows public bodies to “establish guidelines regarding the manner in which such recording is conducted so as to minimize disruption to the meeting.”

The Senate rule states that, “persons with cameras, flash cameras, lights, or other paraphernalia may be allowed to use such devices at committee meetings with the permission of the Chairman as long as they do not prove disruptive to the decorum of the committee.”

Parson, in an interview after the hearing, said he has followed the same camera policy all year: If someone wants footage of his hearing, they can get it from the Senate.

“As long as the public is aware of everything that goes on, I think you’re satisfying the right to know what’s going on there,” he said. “As long as you’re filming it from beginning to end, I’m not sure you’re taking away anyone’s ability to record — well, you are, but I’m saying it’s there and anyone can get it.”

In some cases, however, it is not. Last month, the liberal advocacy group Progress Missouri filed a lawsuit against the Senate in which they claimed the Senate did not provide “gavel to gavel” footage of committee hearings and had blocked its staffers from filming the hearings themselves.

Parson said, “if you were cutting out part of it, I’d see more of an issue,” but said he had no problem barring cameras from the public meetings if the Senate filmed them entirely. “You can still always come in as a reporter and write or record — we never stopped any of that,” he said.

They did, however, stop people from taking photos. At least one person, Grace Haun, another Progress Missouri staff member, had her phone taken away when she refused to stop taking photos of the hearing.

I just tried to #periscope the #RTW hearing and they threatened to take my phone. #MoLeg

Typically, Senate doormen cite a committee chairman’s discretion when enforcing rules at hearings. But, Parson said he did not care much about the cameras.

“There was no phones I asked to be taken today, period. I had no idea of that,” he said. “We’re in a world of cell phones today, and everyone probably knows if you’re out somewhere, someone is probably going to snap a shot of you.”

Amid the controversy Monday and the pending lawsuit, Parson said he would be open to revisiting the issue next year.