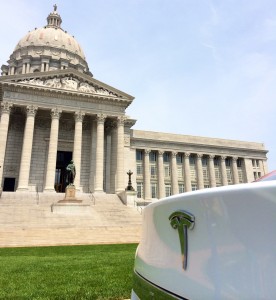 JEFFERSON CITY, Mo. – The Missouri Auto Dealers Association planned to file a lawsuit against the Missouri Department of Revenue on Thursday accusing it of violating the state’s franchise law by issuing an auto dealer license to the high-tech car company Tesla Motors.

The auto dealers, and specifically Reuther Ford and Osage Industries, claim they have been “aggrieved” because the department has required “them to comply with statutory requirements, and [does] not require Tesla to comply with those same requirements.”

Under current law, car and truck manufacturers are typically required to sell their cars through dealerships. Missouri law prevents auto manufacturers from competing with their franchisers. The lawsuit asks the court to declare that the department must not give a new motor vehicle dealer license to Tesla.

“[The department’s] decisions to grant a license to Tesla and renew it in violation of Missouri law will encourage other vehicle manufacturers to disregard the requirements to sell vehicles through properly licensed Missouri dealers which are operating pursuant to a valid franchise agreement with their manufacturer,” the lawsuit reads.

The lawsuit  – filed by Lowell Pearson, a former Revenue Department official for former Gov. Matt Blunt – comes months after the auto dealers attempted to clarify state statute in a way that would have made clear a their plan for Tesla to sell cars through the auto dealer system. In Michigan, legislators have banned Tesla from selling directly to consumers, instead opting to maintain the dealer model.

In recent weeks, the Missouri Auto Dealers Association has ramped up its political presence in Jefferson City. They hired a new communications consultant, Brittany Burke, and earlier this week they began airing a television advertisement in St. Louis. Between Burke and the ad, the auto dealers have both been touting the economic impact auto dealers have on the state. The 381 auto dealers employ as many as 20,000, the association said.

Diarmuid O’Connell, Tesla’s vice president of corporate and business Development, called the lawsuit a “desperate attempt to prevent an innovative company like Tesla from bringing products directly to market.”

“Missouri law is very straightforward in that it prohibits manufacturers that use independent franchisees from competing directly against them. This has nothing to do with Tesla, which has never used independent franchisees. The fact that MADA tried and failed last year to change existing Missouri law to make it apply to Tesla, proves the frivolousness of this legal challenge,” he said. “The goal of both this lawsuit and anti-Tesla legislation is to create a distribution monopoly that will decrease competition, hurt consumer choice, and limit economic investment in Missouri. We will continue to oppose these efforts to advance anti-free market regulations both in Missouri court and in the legislature.”

Next week, Tesla is dipping its toes back into Missouri, hosting a reception for lawmakers during which they can take out one of their cars – which often run as much as $100,000 –  for a spin.