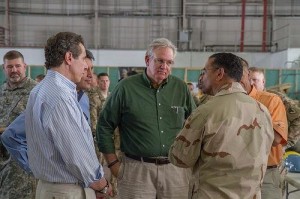 JEFFERSON CITY, Mo. – Gov. Jay Nixon announced on Monday that he has called up the Missouri National Guard in advance of a grand jury decision on the investigation into the white police officer who shot Michael Brown, a young black man.

Chapter 41, section 41.480 of the Missouri Revised Statutes, which Nixon cited in his order:

41.480. 1. The governor may, when in his opinion the circumstances so warrant, call out the organized militia or any portion or individual thereof to execute the laws, suppress actual and prevent threatened insurrection and repel invasion. The governor, if in his judgment the maintenance of law and order will thereby be promoted, may by proclamation declare martial law throughout the state or any part thereof.

2. The governor may, when in his opinion circumstances so warrant, call out the organized militia or any portion thereof as he deems necessary to provide emergency relief to a distressed area in the event of earthquake, flood, tornado or other actual or threatened public catastrophe creating conditions of distress or hazard to public health and safety beyond the capacities of local or other established agencies.

Citing that statute, Nixon ordered the state’s adjutant general to order National Guard troops into the region “as he deems necessary to protect life and property and assist civilian authorities,” and to “employ such equipment as may be necessary to carry out requests processed through the Missouri State Highway Patrol and ordered by the Governor of the state to protect life and property and support civilian authorities.”

To activate the Missouri National Guard, governors have first declared states of emergency. It has happened dozens of time in the past decade. But, they have typically done so to respond to a natural disaster. This time, the order was preemptive and its focus was the potential of civil unrest.

Nixon said last week the National Guard had not trained with the local police departments which will be managing any response to the grand jury’s decision.

WHEREAS, the City of Ferguson and the St. Louis region have experienced periods of unrest over the past three months; and

WHEREAS, the United States Department of Justice and St. Louis County authorities are conducting separate criminal investigations into the facts surrounding the death of Michael Brown; and

WHEREAS, the United States Department of Justice and St. Louis County authorities could soon announce the findings of their independent criminal investigations; and

WHEREAS, regardless of the outcomes of the federal and state criminal investigations, there is the possibility of expanded unrest; and

WHEREAS, the State of Missouri will be prepared to appropriately respond to any reaction to these announcements; and

WHEREAS, our citizens have the right to peacefully assemble and protest and the State of Missouri is committed to protecting those rights; and

WHEREAS, our citizens and businesses must be protected from violence and damage; and

WHEREAS, an invocation of the provisions of Sections 44.010 through 44.130, RSMo, is appropriate to ensure the safety and welfare of our citizens.

NOW, THEREFORE, I, JEREMIAH W. (JAY) NIXON, GOVERNOR OF THE STATE OF MISSOURI, by virtue of the authority vested in me by the Constitution and Laws of the State of Missouri, including Sections 44.010 through 44.130, RSMo, do hereby declare a State of Emergency exists in the State of Missouri.

I further order that the St. Louis County Police Department shall have command and operational control over security in the City of Ferguson relating to areas of protests, acts of civil disobedience and conduct otherwise arising from such activities.

I further order, pursuant to Section 41.480, RSMo, the Adjutant General of the State of Missouri, or his designee, to forthwith call and order into active service such portions of the organized militia as he deems necessary to protect life and property and assist civilian authorities and it is further directed that the Adjutant General or his designee, and through him, the commanding officer of any unit or other organization of such organized militia so called into active service take such action and employ such equipment as may be necessary to carry out requests processed through the Missouri State Highway Patrol and ordered by the Governor of the state to protect life and property and support civilian authorities.

This Order shall expire in thirty days unless extended in whole or in part by subsequent Executive Order.

IN WITNESS WHEREOF, I have hereunto set my hand and caused to be affixed the Great Seal of the State of Missouri, in the City of Jefferson, on this 17th day of November, 2014.