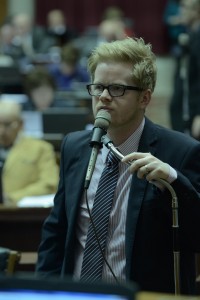 JEFFERSON CITY, Mo. – Both chambers of the state Legislature approved legislation on Thursday that would ban minors from purchasing electronic vapor cigarettes.

The legislation, HB 1690, sponsored by Rep. Caleb Rowden, R-Columbia, would restrict alternative nicotine products and vapor products from being sold to anyone under the age of 18, in the same way the state limits access to traditional tobacco cigarettes.

“What it does do is make sure we take a stand today,” Rowden said, “that we’re standing with the minors in Missouri.”

Democrats, led by Rep. Jill Schupp, D-St. Louis County, raised concerns about a change added to the bill in the House Committee Substitute that reads, “notwithstanding any provision of law or rule to the contrary, alternative nicotine products and vapor products shall only be sold to persons eighteen years of age or older, but shall not be taxed or otherwise regulated as tobacco products.”

“They are tobacco products. What we don’t know yet is how safe these vapor products are. Some include flavoring which makes them particularly of interest to young people,” she said. “Perhaps the goal of big and small tobacco is to get young people who might want a bubble gum flavor… addicted to the nicotine, maybe they’ll grow form a tobacco product to a cigarette.”

Democrats noted that tobacco companies had, in 26 other states, pushed for similar language. When asked where he got the idea to add the language in the substitute, Rowden said, “it came from my brain.”

Rep. Todd Richardson, R-Poplar Bluff, said if some Democrats were so opposed to the language, they ought to have added an amendment when the bill was perfected by the body on Tuesday.

“Surely, if someone had such righteous indignation, they’d file an amendment to fix it,” Richardson said to Rowden. “Rather than trying to fix the bill, we have a situation with people on the other side trying to criticize you for trying to moving forward.”

Schupp, who is running for State Senate in the swing-district currently held by Republican John Lamping, was joined in opposition to the bill by 12 other Democrats and six Republicans, including Dr. Keith Frederick, R-Rolla.

Similar legislation passed in the Senate by a vote of 27 to four.