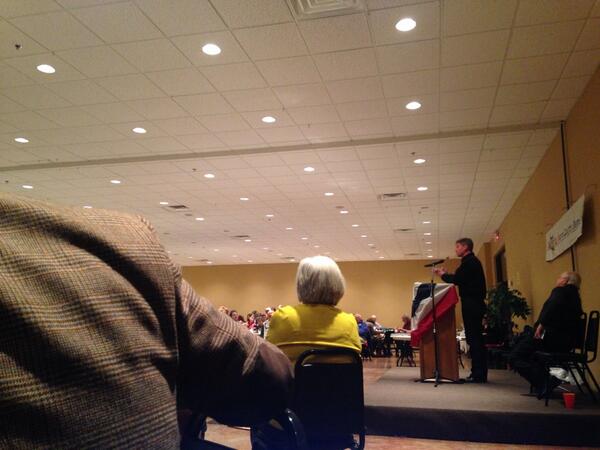 COLUMBIA, Mo. – Just hours after Catherine Hanaway announced her candidacy for the Republican nomination for governor in 2016, Attorney General Chris Koster – the likely Democratic nominee – appeared in Columbia where he shrugged off his opponent’s announcement.

“I think I’m going to focus on my job for the next two years,” Koster said in a brief interview after delivering remarks to the Boone County Democratic Party’s annual chili supper.

Koster said the 2014 midterm elections will be an opportunity for House Democrats to make gains in the General Assembly – as his campaign prepares to write the second $100,000 check in his $400,000 commitment to their efforts.

“John Wright is helping lead that effort,” he said. “Beyond the midterms, we’re going to build communications and an infrastructure to help build dividends in the long term.”

In his remarks, Koster highlighted his switch from the Republcian Party to the Democratic Party in 2007. He did so in Columbia amid the national debate over stem cell research. “I knew I was in the wrong place,” Koster said, when Republicans in Missouri opposed stem cell research.

Koster said Democrats agree with Republicans on many things like low taxes, low regulation and the “power of capitalism.” The difference, he said, is the role of government in helping people.

“On top of those thing we agree on, Democrats also believe in a basic bargain that our children need to be educated, our sick need medicine, and our senior citizens shouldn’t live in poverty,” he said.

Koster was critical of Republicans for their opposition to fully funding the K-12 foundation formula and accept federal money to expand Medicaid in Missouri.

“The federal government has come to Missouri with one of the most extraordinary economic development opportunities this state has ever seen,” he said. “Put aside the healthy outcomes, the emergency visits that are stayed. Simply look at it as 24,000 new jobs.”

Hanaway, in her announcement earlier in the day, attempted to tie Koster to Obama – a similar tactic Republicans tried to use against Democratic Gov. Jay Nixon in the last election.

“The polices of Barack Obama and Chris Koster have resulted in less economic activity, less control over our healthcare and, for some of our communities, a broken educational system,” Hanaway said. “I want to lead Missouri in a different direction.”

Koster is the only Democrat currently in the running. Hanaway, however, will likely face a challenge. State Auditor Tom Schweich, a Republican on the ballot for reelection, is considering a run, as well as former St. Louis businessman John Brunner, whose supporters will be at Missouri Lincoln Days later this month urging him to enter the race.