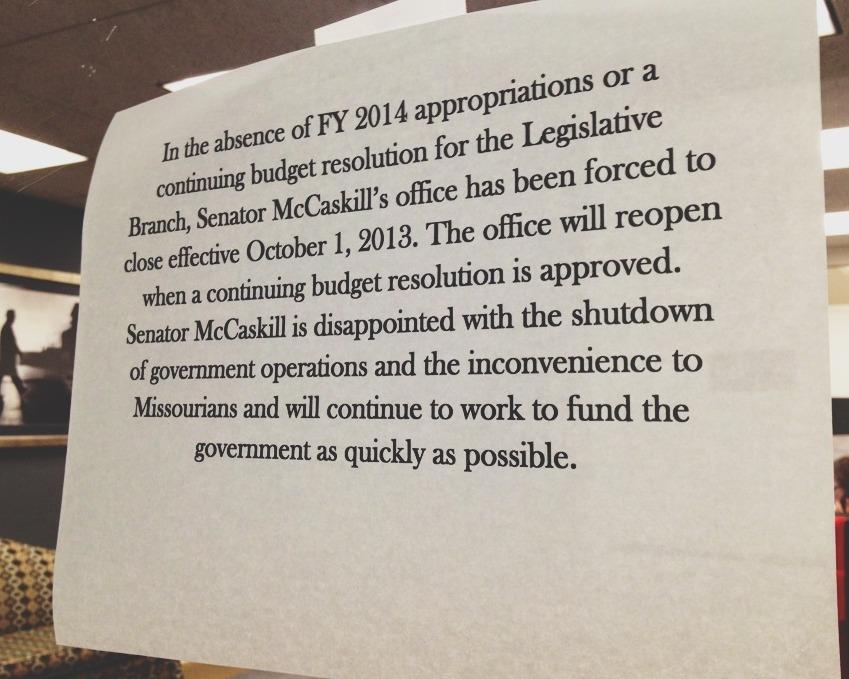 A sign posted on the window of Sen. Claire McCaskill’s Washington, D.C., office says they are closed due to the government shutdown.

– As the doors were being closed at the offices of Democratic U.S. Sen. Claire McCaskill, her Republican counterpart offered a different message: We’re open for business.

On the first day of the first government shutdown in 17 years, U.S. Sen. Roy Blunt opted to keep his entire staff on duty, while McCaskill put all but five of her staff on furlough, deeming the rest “non-essential.”

“In the absence of FY 2014 appropriations or a continuing resolution for the Legislative Branch, Senator McCaskill’s office has been forced to close effective October 1, 2013,” reads a sign posted on the window of her Washington office.

Blunt, a member of Senate Republican leadership, opted to keep his offices open.

“As Missourians’ representative in the Senate, Senator Blunt is responsible for protecting his constituents’ constitutional rights — including their right to ‘petition the government for a redress of grievances.,'” said Blunt spokeswoman Amber Marchand. “Senator Blunt believes each function of his office originates in the Constitution, so all staff is essential.”

McCaskill closed her district offices and trimmed her Washington, D.C., staff back to just five members – her legislative director, legislative assistants for finance and the budget, a scheduler, and a communications assistant. The rest of her staff – including her chief of staff, communications director, and constituent caseworkers – were sent home and will likely not be called back until a deal is reached to fund the government.

Members of Congress get discretion over the pay in their own offices, leading to inconsistency among the members of the Missouri congressional delegation. In addition to McCaskill, Rep. Blaine Luetkemeyer, R-St. Elizabeth, closed his office, blaming the Senate for inaction.

“As a result of the Senate’s intransigence, I have no choice but to furlough much of my staff and shutter my district offices until this situation is resolved,” he said in a statement. “We sincerely regret any inconvenience this will cause the hard-working folks of the Third District who deserve prompt and thorough constituent service from our office.”

Meanwhile, other members opted to keep their offices running.

“Despite the government shutdown, all of my staff will be working, both in my district offices and in Washington, D.C.,” Rep. Sam Graves, R-Kansas City, said in a statement. “I was elected to serve the people of Missouri’s Sixth District, and my staff is here to work on your behalf.”

While staff pay is discretionary, pay for members of Congress is constitutionally required. Reps. Ann Wagner, R-St. Louis, and Jason Smith, R-Salem, said on Twitter they have pledged to not accept their congressional salaries until the government is reopened.