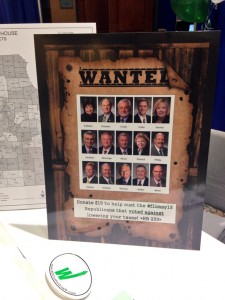 This poster appeared at the Club for Growth’s table at the Conservative Political Action Conference last month in St. Charles.

ST. CHARLES, Mo. – At a pair of Republican events throughout September, a group was on hand to fundraise against seemingly unlikely targets: other Republicans.

Over the weekend at the Conservative Political Action Conference in St. Charles, the Missouri Club For Growth – which advocates conservative economic policies – was raising $15 contributions “to help oust the #flimsy15 Republicans who voted against lowering your taxes,” referring to the controversial House Bill 253.

The group’s board is set to meet to discuss which of the 15 members to target with primaries next year. Republican Reps. David Wood, Versailles, Lynn Morris, Nixa, Dennis Fowler, Advance, and Jeff Messenger, Republic, are among the members most vulnerable to primary challenges.

Reps. Sue Entlicher, Bolivar, Craig Redmon, Canton, Mike Thompson, Maryville, and Don Philips, Kimberling City, all faced no primary opponent in 2012. And Nate Walker, R-Kirksville, was the only member backed by Missouri Club for Growth in 2012 who voted against the bill, placing a target on his back heading in to 2014.

Walker, in an interview last week, said he stands ready to compete regardless of the Missouri Club for Growth’s effort.

“If they want to finance a primary against me, I’ll do the best I can to defend my voting record,” he said.

The group is funded significantly by St. Louis billionaire and investor Rex Sinquefield, who bankrolled the Grow Missouri campaign to overturn Nixon’s veto of the tax cut bill.

But what raised some eyebrows was the fact that they were raising funds against Republicans at an event sanctioned by the Missouri Republican Party two weeks prior to CPAC at the Midwest Republican Leadership Conference in Kansas City.

Matt Wills, spokesman for the Missouri Republican Party, said the party does not endorse the Club for Growth’s position.

“They never informed the party of their intentions and we were unaware of their activities at the KC event,” he said. “The party does not encourage, engage or endorse in primaries.”

Scott Dieckhaus, executive director of the Missouri House Republican Campaign Committee, said despite any vote, his organization will back its members if they are challenged in primaries.

“HRCC is made possible by the caucus, and it will stand by its members,” he said.